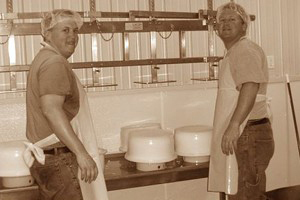 Mike Bandstra grew up on a small dairy farm south of Pella. While Mike was in high school, his dad sold the cows after their family farm was annexed into the city. To his surprise, Mike soon missed the cows. He changed his college major from Accounting to Dairy Science and, after graduating from Iowa State University, took a job with Horizon Organic Dairy in Maryland as a herd manager.

Mike’s brother, Jason, also developed the desire to get back into dairying. Jason bought some bottle calves, grew the herd, and started milking. Mike moved back to Iowa and joined Frisian Farms with Jason. The brothers soon dreamt of a way to add value to the dairy…making cheese. Influenced by their Dutch heritage and community, Gouda seemed to be the perfect choice. Gouda is a semi-hard cheese named after a Dutch town in the province of South-Holland, and accounts for more than 60% of the cheese produced in the Netherlands.

They were quick to learn that the cheese making process is both an art and a science. In order to make Frisian Farms Gouda in the proper Dutch fashion, they invited a Dutch cheesemaker to their farm to teach them techniques that would produce a cheese that reflects the perfection of a process that developed over hundreds of years.

After six years of making cheese, the processing and storage areas were outgrown. This presented an opportunity to move the cheese facilities to a more convenient location, and in 2015 the Frisian Farms Cheese House was built.